An asymmetrical shape, a frog on the case back and a word that explains everything: Frogman. Frog divers from G-Shock are celebrating their anniversary in 2023, and Casio has prepared some anniversary models. So what made the Frogmans so famous? And how have they changed over the past 30 years? Today we dedicate a short historical window to the Frogmans and introduce the news of this frog empire. 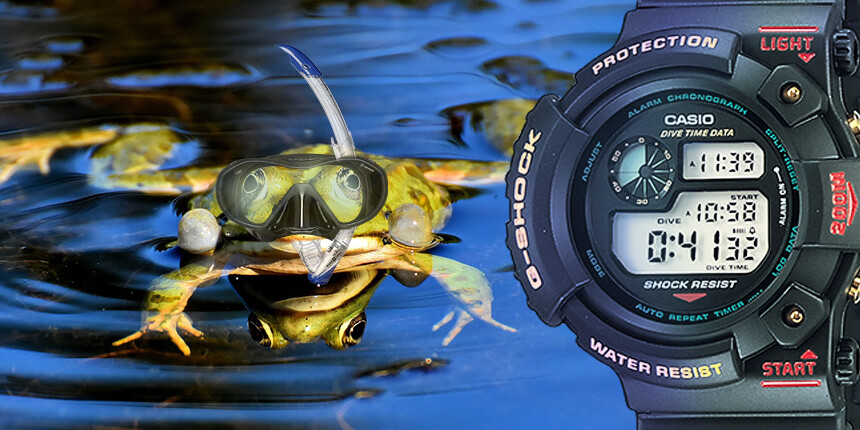 Peculiar divers that have won over the watch community

The first model appeared in 1993. It was called DW-6300 and had the word Frogman and a small figure of a diving frog on the back case.

The First Frogman DW-6300s did not yet have the name Frogman on the case.

It wouldn't be that unique, but the watch had an asymmetrical case design that quickly became recognizable and is still associated with Frogman models today. And that wasn't all. The case of the watch was screw-on, not screw-on, and this specification remained with them practically throughout. 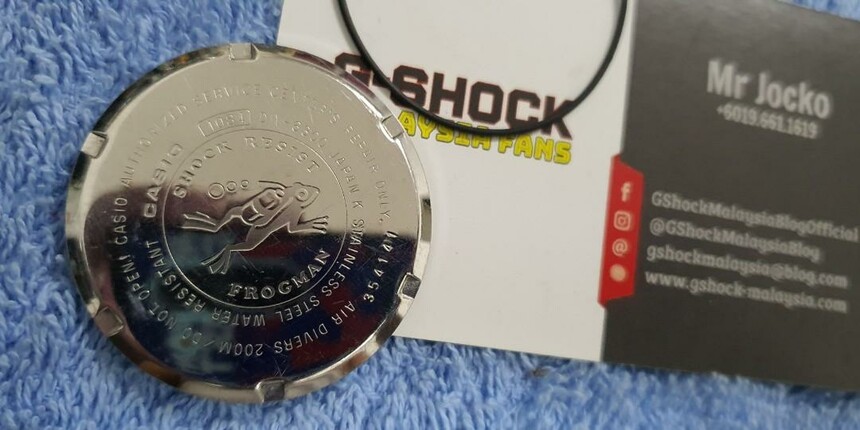 Back case of DW-6300 with Frogman and Frogman label. Source: www.carousell.com.my

But the main thing - it was the first truly diving G-Shocks with water resistance up to 200 meters. Yes - I know, I know, all G-Shocks have WR 200M. But these had a real 200 meters according to the international diving certification ISO 6425. So the Frogmans were - and still are - the only G-Shocks with Diver's certification.

And this despite the fact that they do not have a rotating bezel like ordinary divers. Frogmans are instead equipped with a mode measuring the time spent underwater (Dive Time Measurement Mode), and even with the ability to save the recording. Confusing can be the letter W in the name, which many associate with Casio with radio time reception, but this appears later on Frogmans, signaling a simple Watch. 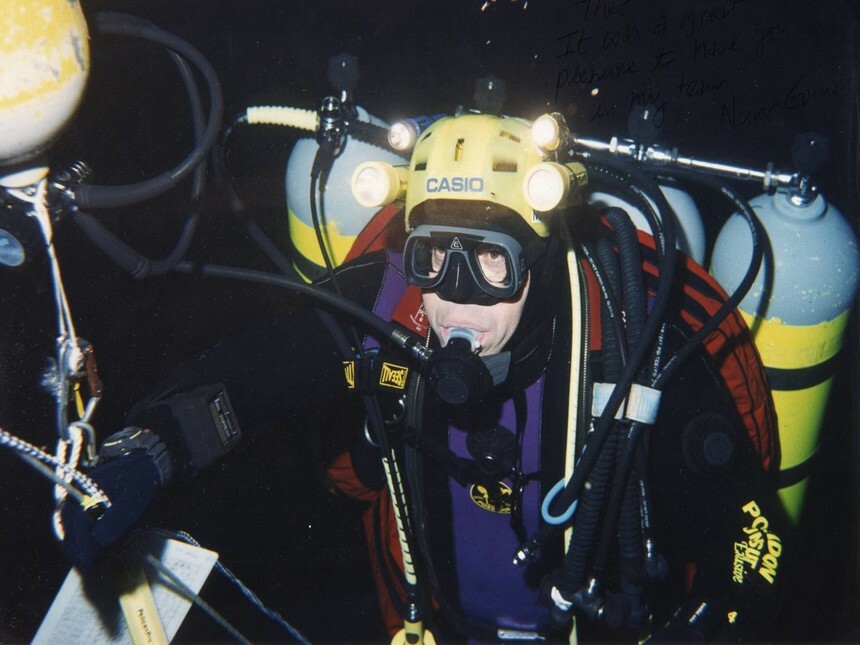 Frogmans have been quite robust from the start and have gained recognition mainly for their durability and quality workmanship. After all, Frogmans were and are produced exclusively in Japan. They were loved not only by professionals, but also by collectors, because it was the special editions that became sought-after collector's items.

Professional divers who wear Frogmans include Nuno Gomez, who dived to an incredible depth of 318.25 meters. And with Frogmans on hand.

The model gained surprising popularity and Casio released several color variants by 1995. Even more came with the second generation Frogman DW-8200, which combined a G-Shock structure with a titanium bezel.

The second generation of Frogmans – DW-8200

Interestingly, the Frogmans infiltrated even the highest places - in 1999, the Frogman MRG-1100 was introduced. In addition to the features and Frogman design, what was unique about it was that it was all titanium.

(On the G-Shock forum G-central, there is currently speculation that a hybrid of MRGs and analog Frogmans could appear in 2023. But who knows... who knows...) 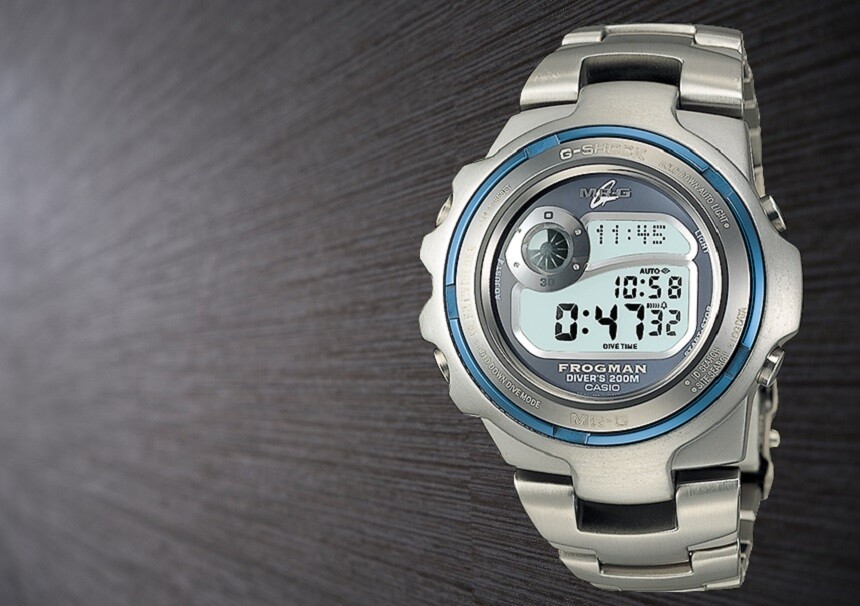 In the same year came the DW-9900, which was especially unusual in its smaller dimensions of 51.6 x 46.8 x 15.9 mm. However, it was not only smaller in size, but also less popular and was replaced relatively quickly.

Better than a tree frog. The Frogmen are solar powered and radio controlled

The first Frogmans with Tough Solar appeared in 2001 with the indication GW-200. This generation also received many color variants, including the popular GW-200Z from 2009, which was also nicknamed the Final Frogman. 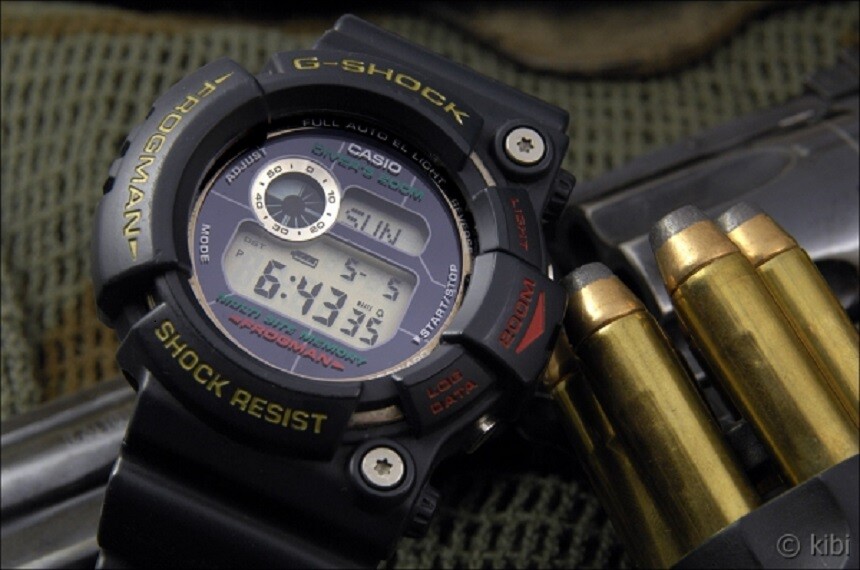 Frogman DW-200 with titanium body including back case and solar power. Source: info.photowatches.eu

Since then, Frogmans have had solar power in their gear regularly. The turning point came in 2009 with the GWF-1000 version. It was the first Frogman that not only had a solar system, but also Multi Band 6, so it synchronized according to the radio signal from all 6 stations. 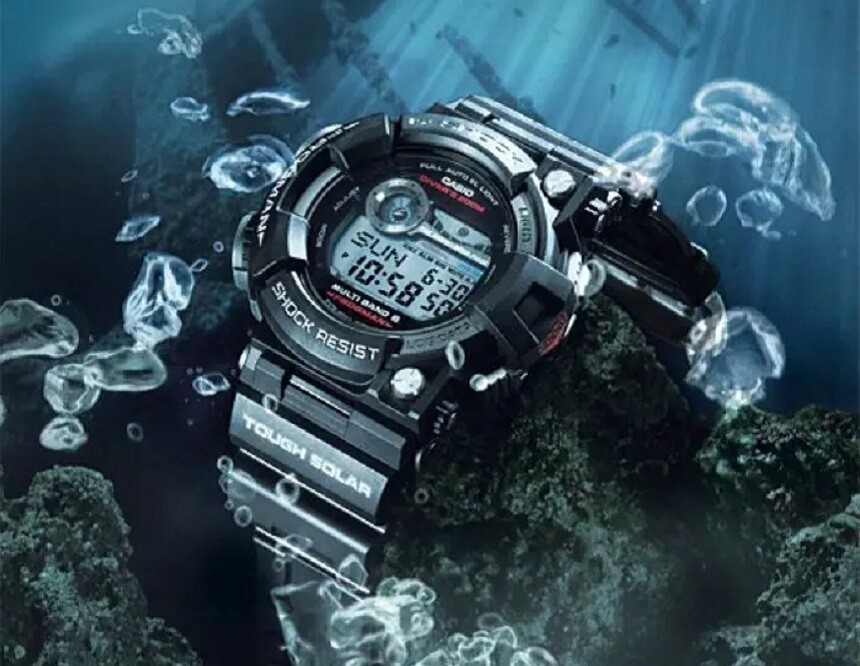 The GWF-1000s were the first Frogmans to receive a radio signal.

The dimensions of the GWF-1000 were 58.3 x 52.8 x 18 mm, and in addition to Dive Mode (with a memory of 10 records), this Frogman was also equipped with a tide and moon phase graph. The steel body protected by G-Shock resin also had a DLC treatment that increased corrosion resistance.

In this era we can also include the GF-8200 series, which were produced from 2010 and were in many special editions. And that includes the Frogman GF-8235D-1BER for the 35th anniversary of G-Shocks. A striking similarity can also be traced to the current special edition GW-8230B-9AER for the 30th anniversary of the Frogmans. Or was it a different model...? Well, more on that in a moment.

We have yet to complete our journey. Even solar in combination with RC synchronization did not mean the end of development. In 2016, Casio introduces Frogmans with a sapphire glass and the indication GWF-D1000, to which three essential sensors have been added: a thermometer, a depth gauge and a compass.

Frogmen get hands and carbon

The year 2020 was an evolutionary frog leap. The analogue Frogman appeared on the market. For the first time in the history of this collection, our frog has handles. It bears the indication GWF-A1000 and the analog display was not the only revolutionary step. 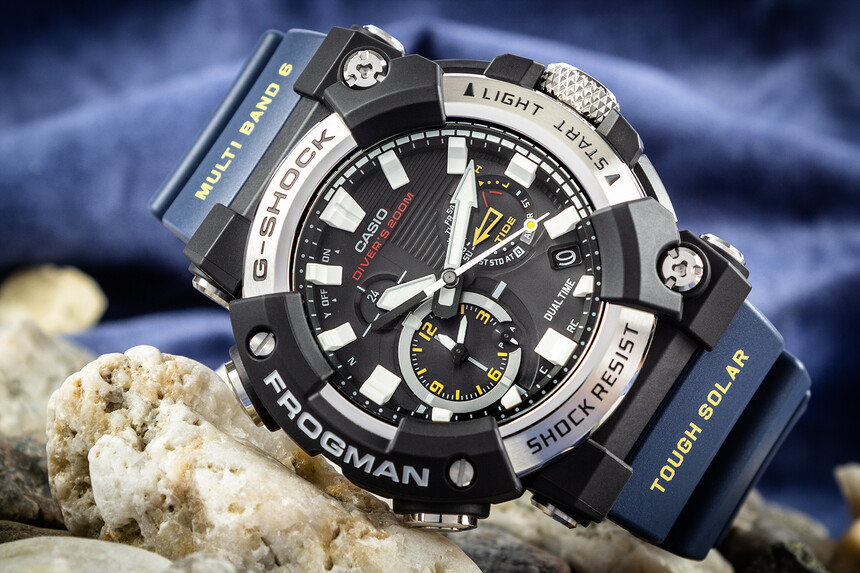 The metal screw-on pumpkin that we have known since the beginning of Frogmans has been replaced by resin reinforced with carbon fibers. In addition, they received modern Bluetooth communication technology, through which they can connect to a mobile application. 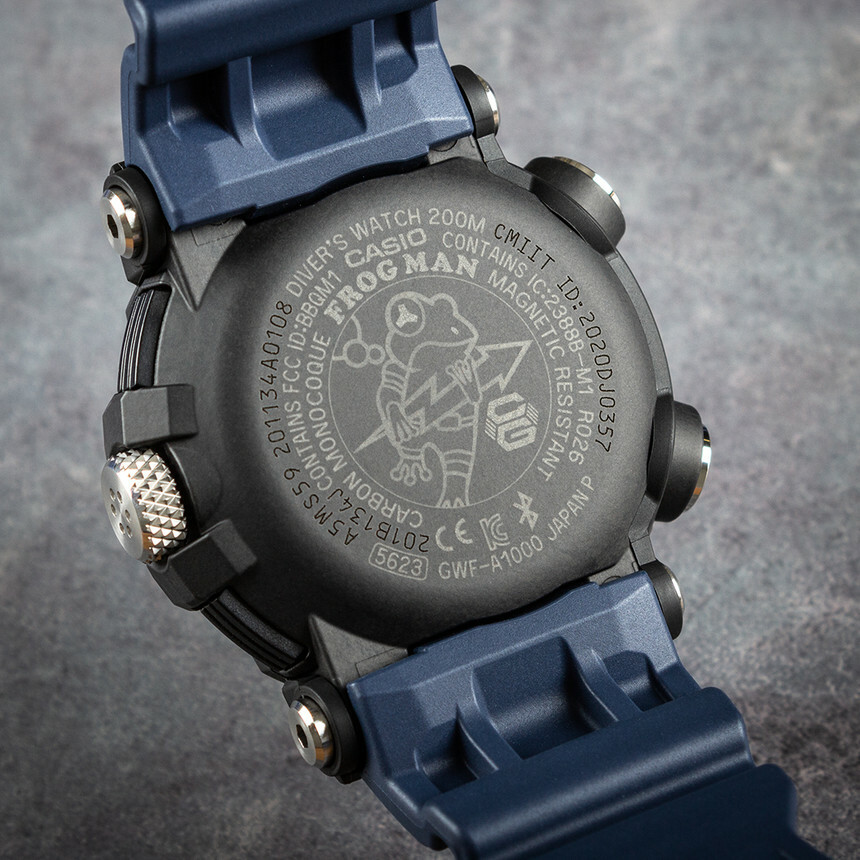 Even the modern concept has not changed anything about their resistance and ISO 6425 diving certification. Casio also introduced a special rainbow edition dedicated to the rare Bornean rainbow toad. And needless to say, the water just ran clear after her and they were gone. 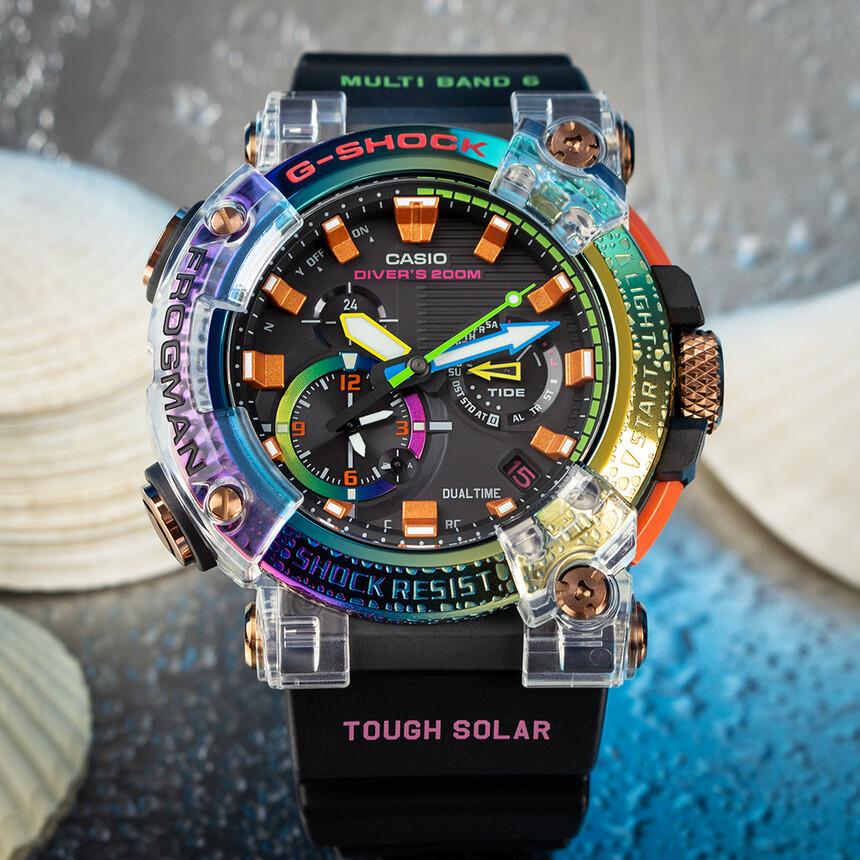 They are no longer young frogs. Frogman turns 30

Casio chose the gold edition of the DW-8200 probably because it sold out quickly in its day and is now a sought after collector's item. It thus represents an ideal example of the significance and popularity of the Frogmans. Casio kept not only the design, but also the size. 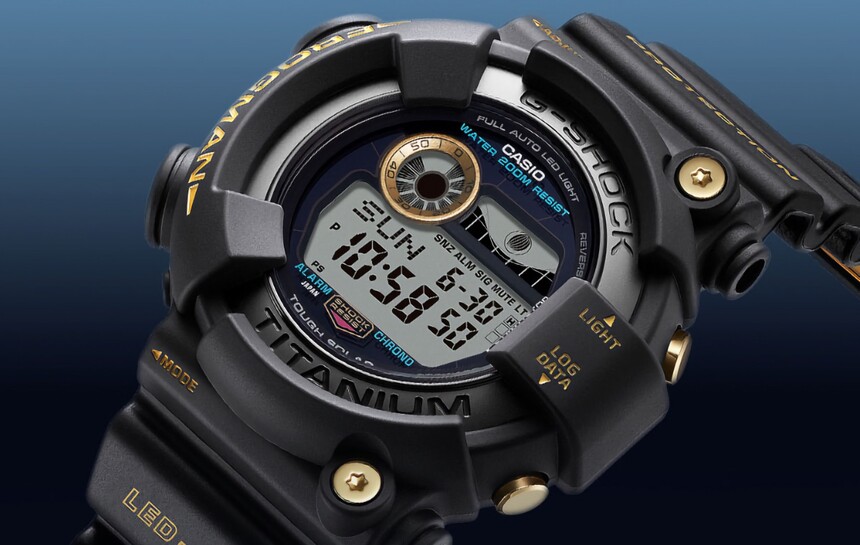 But it doesn't really matter what models they refer to, they are simply pure-bred amphibians belonging to the Frogman family. Again, we have a titanium body including a screw-on gourd and a gourd frog. This time it is in the basic design, as on the first models. 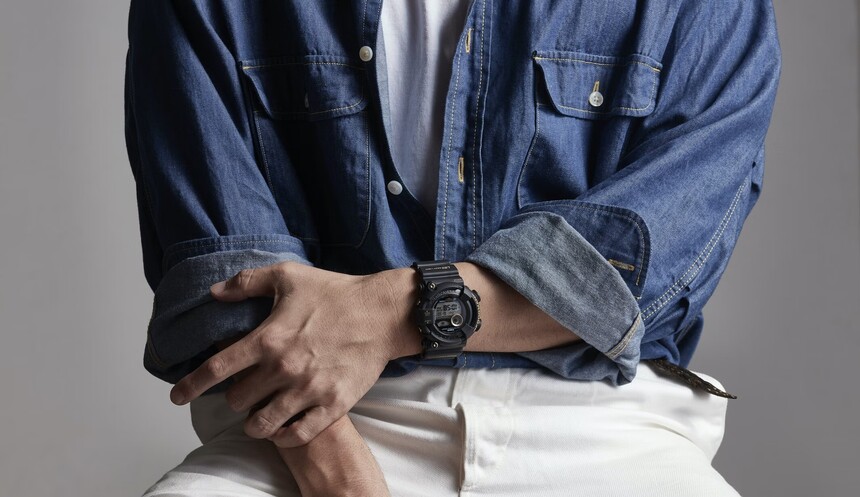 In addition, Casio has been going the Eco route a lot lately, so this model's g-shock case and strap are made of biomass. And just as the "W" confused us with the first generations, it confuses us this time as well, because the new GW-8230 does not pick up the radio signal. But solar power is a matter of course.

Testing the new Frogmans was just as fair as in the past, maybe even more challenging. In addition to overall resistance, tests of static electricity or pressing buttons in water and under pressure are also carried out. 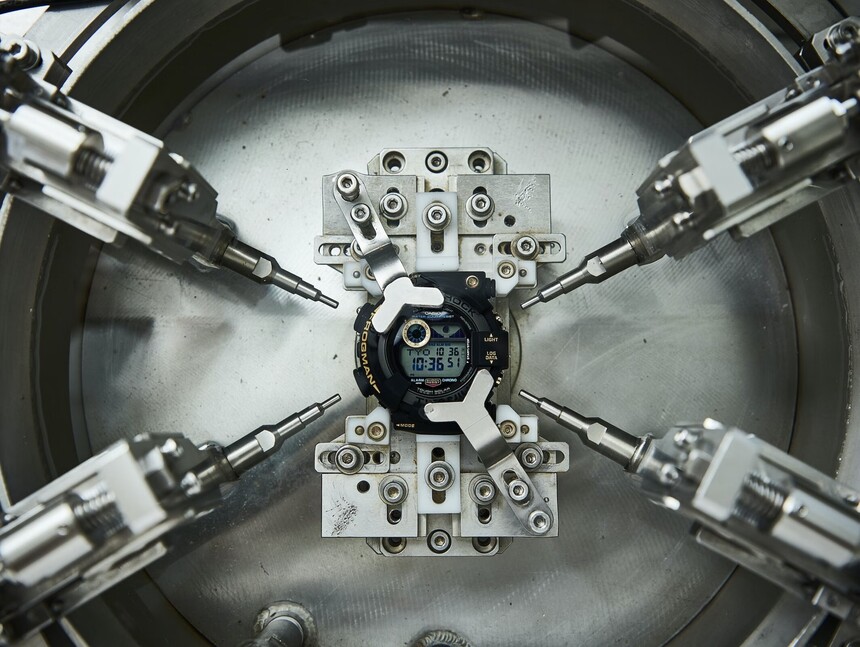 The annual model is in a special box and after activating the LED backlight, a frog appears. Of course. 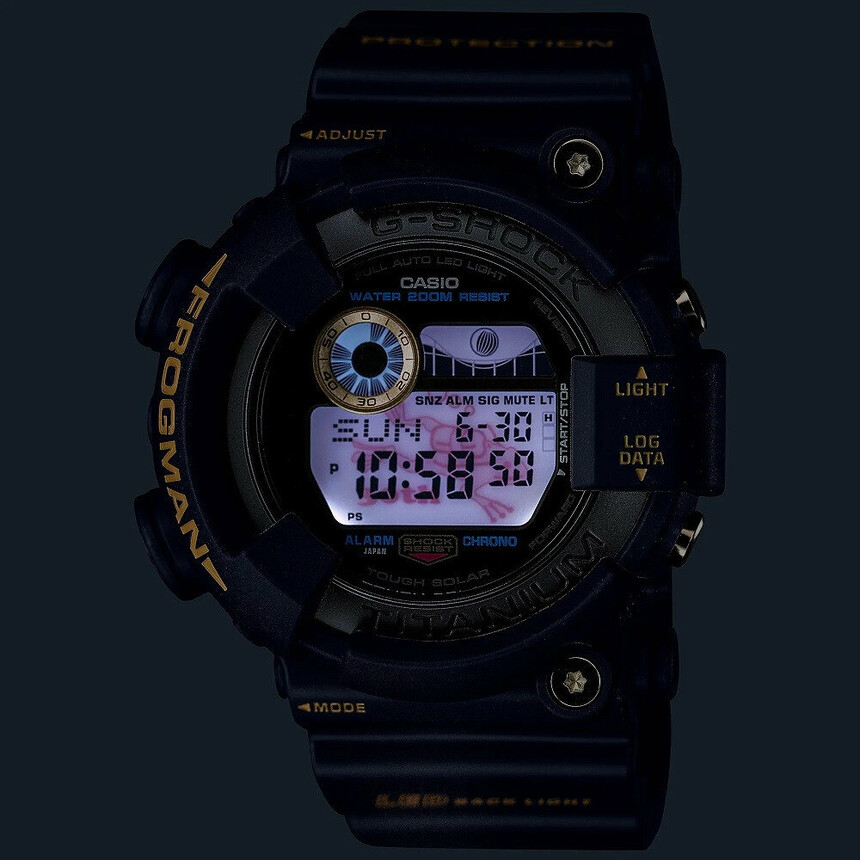 And a little color at the end. Remember the rainbow edition dedicated to the rare Bornean rainbow toad? Thus, the successor is dedicated to a poisonous frog inhabiting the Amazon rainforest.

The GWF-A1000APF-1A model will again be a limited edition and the bezel is made of laminated carbon with glass fibers. The colors are then unique, apparently different for each piece and will change at different angles. 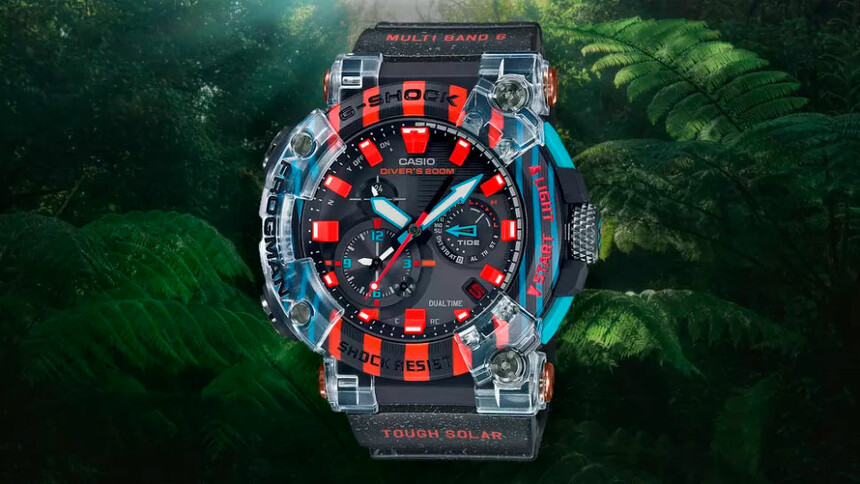 Functionally and dimensionally, it is no different from the analog GWF-A1000, however, it is speculated that it will be the last model in this development series of Frogmans, which adds to their attractiveness.

Frogmans is one of the longest-running G-Shock series and has always been considered a top model. It is not yet known what kind of flip flops we can look forward to in the future, but we certainly have something to look forward to. 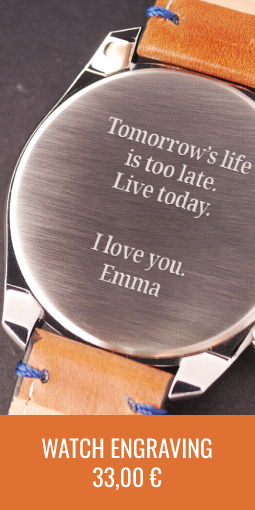